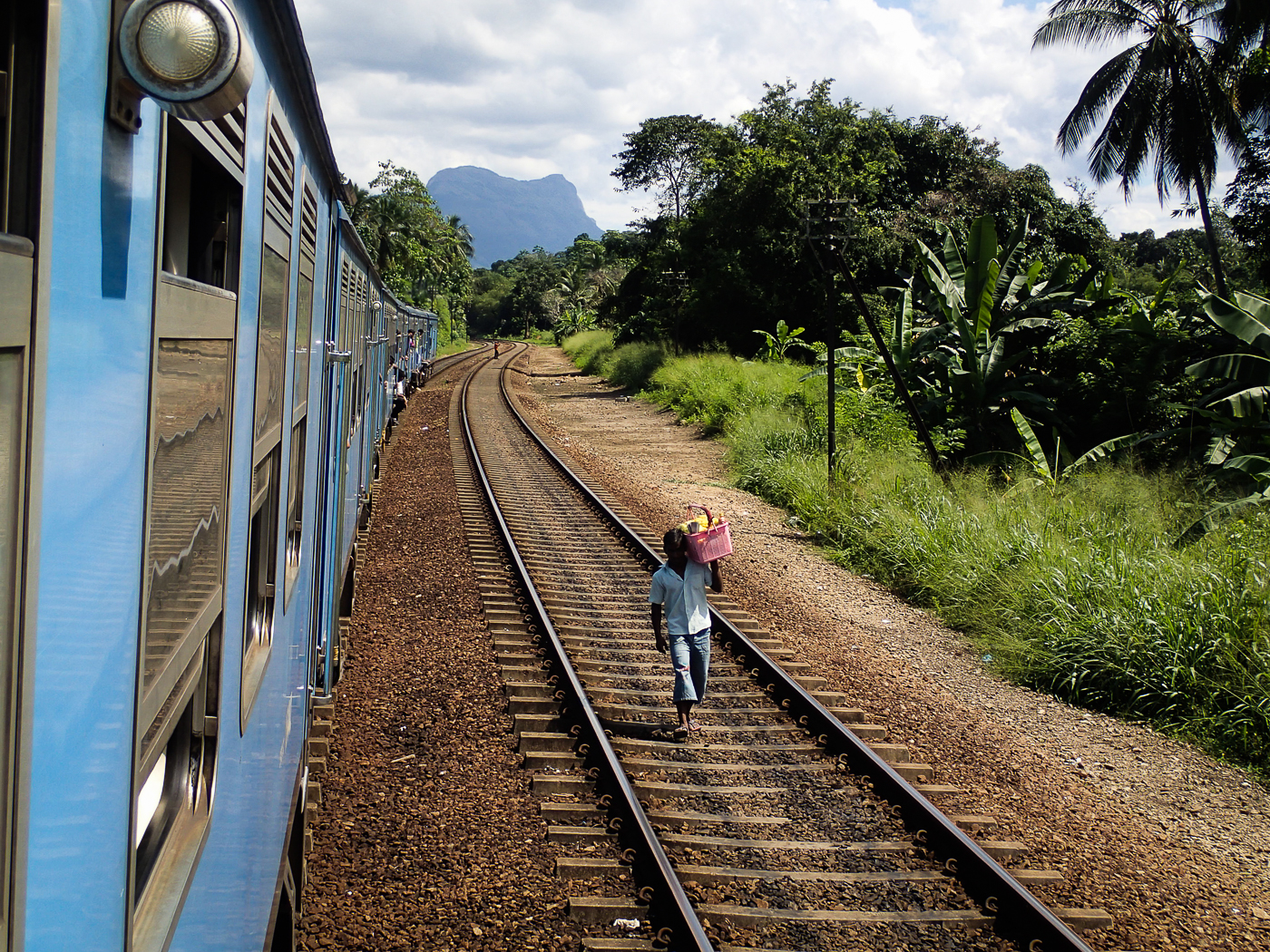 In one of my earliest memories I was sitting on the train, rather than in it. I was five years old, slowly rattling across the Ecuadorean countryside with my parents, enjoying the wind and the views from the corrugated iron roof.

Six years later, we spent five days on the Trans-Siberian Railway travelling from Moscow to Irkutsk, where long stretches of sleepy inertia were punctuated by a flurry of brisk trade at every remote station. Hot potato dumplings sold from the platform, shoes and trousers from the train. The chaos of commerce enveloped us for only a couple of minutes before the train started pulling out of the station – and if your new shoes don’t fit, tough luck.

Of course, I have plenty of horror stories too – aggressive food poisoning on an Indian night train aged twelve, ten hours spent sitting on the floor next to the toilet after being sold an invalid ticket from Mumbai to Ahmedabad a dozen years later. (Note to self: never order eggs at an Indian train station.) Yet Indian train travel, for all its frustrations and discomforts, is also incredibly fun, cheap, and always full of surprises. Travelling in India without taking at least one long-distance train ride is like visiting Naples and not having pizza.

It is difficult to overstate the importance of the Indian railway for the country and its people. It comprises 108,706 km of track and 7500 locomotives, which transport an average of 13 million passengers every day. Between the drivers, station masters, ticket collectors, porters, chaiwallahs, platform sweepers, cloakroom attendants and a myriad other indispensable cogs in the system, the Indian Ministry of Railways oversees a workforce of almost 1,5 million people, second only to China’s People’s Liberation Army as the largest employer in the world.

This British colonial inheritance spills over to Sri Lanka, where the most stunning parts of the country are best seen by taking a train along the coastline, from Colombo to Kandy and to the tea plantations beyond. In countries dependent on train travel, a railway map also serves as a handy guide to their history and politics. It took 43 years for train service to resume between India and Bangladesh after partition, and the Tamil north of Sri Lanka was cut off from the rest of the country for 24 years after the railway was destroyed in the civil war.

In late 2014 I headed to the Tamil capital on the newly inaugurated “Queen of Jaffna” train, which had only resumed service two weeks prior. Young Sinhalese from the south were taking the opportunity to see with their own eyes the places that they had only ever heard about on the evening news. On the train platform, a group of boisterous students crowded around the “Jaffna” sign, posing for selfies as old Tamil women looked on with bemused indifference.

In Europe, long-distance train travel has long been considered a relic reserved for hopeless romantics while the more practically-minded embraced budget airlines. But the tide is turning. Even before the Coronavirus made everyone wary of planes and airports, trains have been making a comeback as people are looking to cut their carbon footprint and exchange their flygskam for Tagskryt. (“Flight shame” and “train bragging” respectively, because of course the Swedes have words for both.)

Across Europe, new long distance train connections are springing up to provide what the airlines cannot. There is a sense of being a traveller, rather than merely a body mercilessly herded into a pressurized can and catapulted into the air. (No, I really don’t like flying.) If every tremble of an airplane reminds me that I haven’t yet written a will, nothing soothes me like the clickety-clack rocking of a train. People are more relaxed on a train, settled in for the journey rather than simply waiting for the destination. The changing view out the window gently easies you from one place to the next, and your fellow travellers obligingly swap out every couple of stations, so that people-watching opportunities are endless and you are rarely in danger of being held hostage by an overly talkative neighbour for twelve hours. The harried tedium of flying – the long way to the airport, the lines, the security, the ritualistic confiscation of nail clippers, the soggy sandwich that costs half the month’s rent – is replaced by a leisurely saunter to the platform, usually only a skip and a hop away from the city centre.

They won’t let you sit on the roof of the train in Europe, but on the plus side you can order eggs without risking a trip to the hospital.