Impressions from a timeless corner of Romania

The “where” is clear enough: Breb is a small village at the foot of mount Gutâi in the remote Romanian region of Maramureș, which hugs the rolling hills of northern Romania and spills across the border into Ukraine.

The “when” is, at first glance, not as easy to determine. A stroll through the maze of footpaths and gravel roads that criss-cross the village reveals scenes as timeless as they are rare. Log cabins, held together by dovetail notches and roofed with hand-split shakes, squat behind massive wooden gates, their every inch intricately carved by hand, earning the region its reputation as the “land of wood”. Even the wooden barn doors are an artwork in themselves and the courtyards are filled with farm animals straight out of a children’s book: the self-satisfied rooster prancing and preening in front of his harem; the gleaming slender horses and pink snuffling pigs; the lazy cat dozing on the windowsill; tiny sheep grazing in the shade of the apple trees. 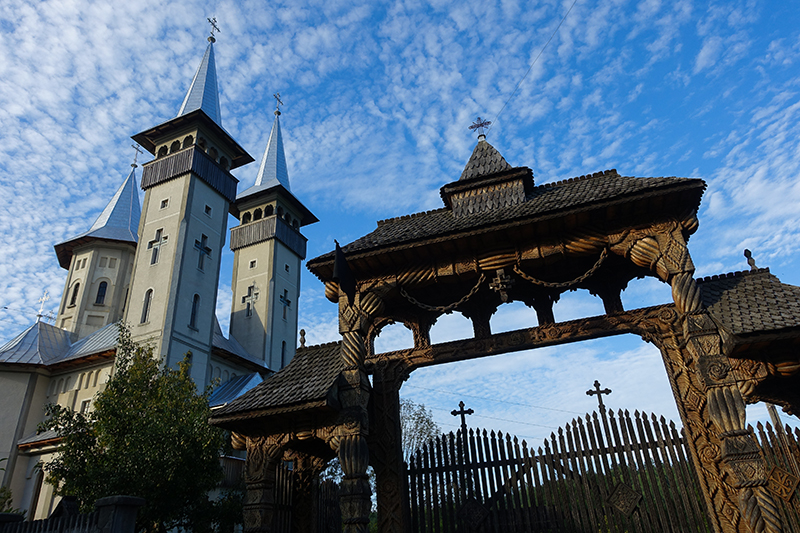 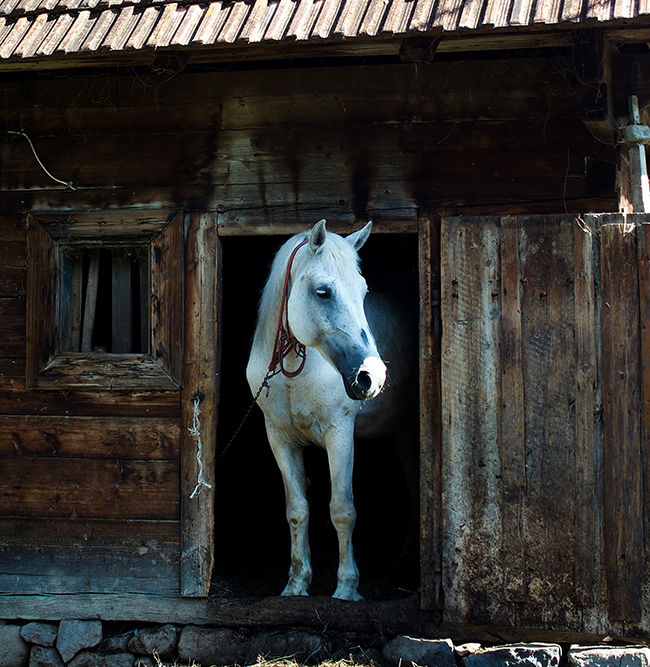 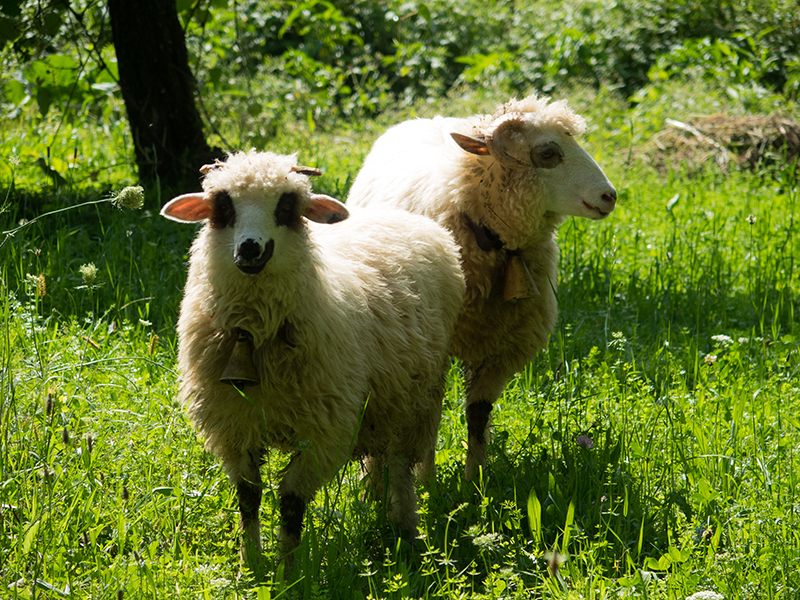 While the rest of Europe languished under a scorching heatwave rain came to northern Romania like clockwork, every sultry afternoon punctuated by a sudden downpour. The grass is an effervescent green, the kind that blazes in the low-hanging evening sun, and on this August afternoon the branches of trees hang low over the street, creaking under the weight of the ripening fruit. The stillness of the day is interrupted by the occasional rat-tat-tat as a hailstorm of orange plums is shaken down and gathered in large buckets. The horinca liqueur distilled from them will keep the whole village warm over the winter. Further along the fields surrounding Breb buzz with activity as families cut the high grass with long-bladed scythes and pitch hay with wooden pitchforks, drying it in growing mounds dotted throughout the landscape. The women, always slower than men to surrender their traditional attire, wear wide knee-length skirts and colourful scarves that keep the midday heat off their heads. 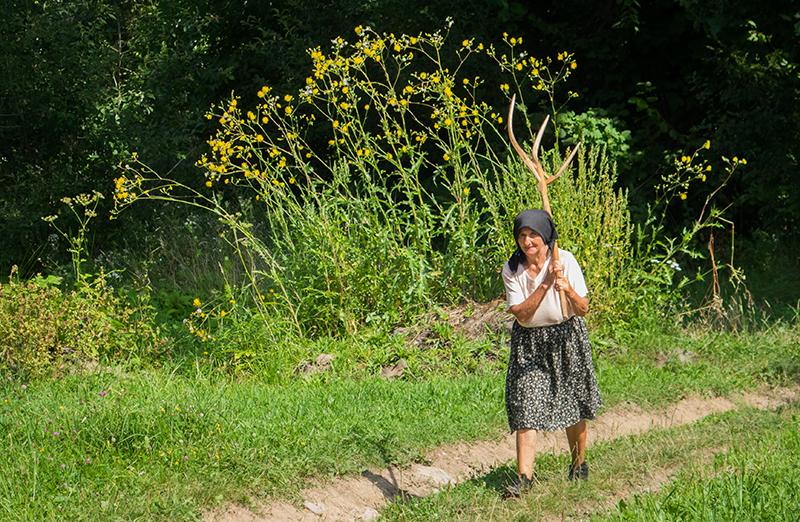 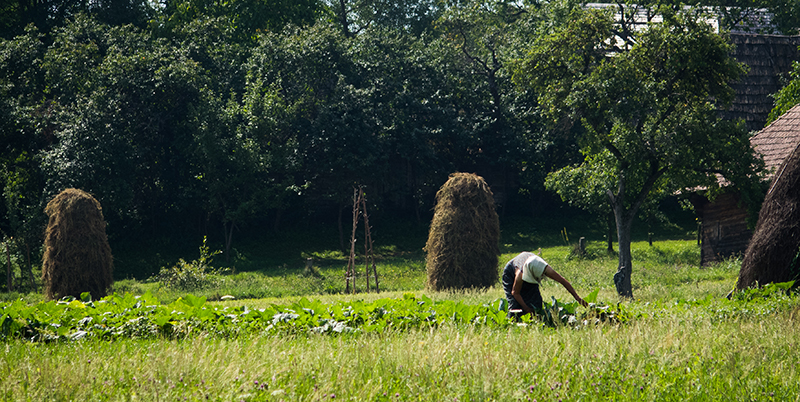 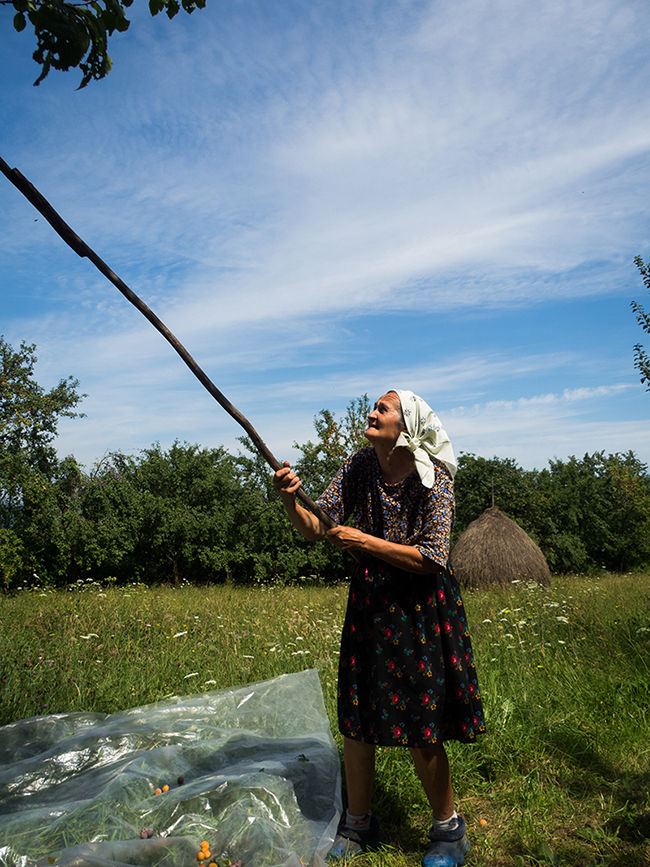 Every now and then Breb is pulled firmly into the present: a stretch of tarmac on the road leading to the new church, the occasional Lamborghini tractor, two tiny shops selling cold beer and a random assortment of food. Walking along the dusty track a sullen teenage girl in a crop top and jeans is lost in the world of her smartphone, a reminder that this village represents the sort of rural bliss that city folks have always loved to romanticize while the local kids can’t wait to get away.

Most everyone in the village owns a cell phone and a car these days, yet these bursts of modernity feel like welcome additions to, rather than replacements of, the traditional way of life. The abundance of fields, orchards and cattle makes most families self-sufficient and the homesteads, while simple, are in good repair, everything with its place and purpose. With a couple of exceptions at the edge of the village most new houses are still built using old wood-working techniques and the fields are still tended to by hand, using traditional tools. There is no sign of the poverty and despondency that suffocates so many other Romanian villages seen on the way.

Man-made time slips and slides in Breb, expanding until it becomes obsolete. The lives of the villagers follow the rhythms of nature, the rising and setting of the sun, the turning of the seasons. The lack of any official “sights” happily absolves the visitor from the tyranny of sightseeing. Breb is not so much a place to visit as a place to experience, a place to spend long days going on aimless walks, chatting with people through the intricate dance of gestures and laughter that lets one speak without sharing a language, accompanied by friendly village dogs and the occasional adventurous chicken, all the while grazing on the ripe orange plums falling from the trees.