There Is No Escaping Death in Tana Toraja

From the mummies of Egypt, the Père Lachaise cemetery in Paris and the bone-filled catacombs below it, Mao's embalmed body on Tiananmen Square or the Merry Cemetery in Romania, places associated with death have always held a certain sway over the living. Tucked away in a mountainous corner of South Sulawesi, their elaborate mortuary rites have made the Toraja world famous – at least among anthropologists and other weirdos who go in for that sort of thing.

In Londa, two natural caves are filled with coffins and bones, cigarettes and coins scattered all around as offerings. A true Indonesia won't let death get in the way of his two-packs-a-day smoking habit and while cheaper local brands are the usual fare in life, the dead like to splurge on Marlboros. Skulls are stacked into nooks and crevices next to crosses covered in artificial flowers. Widely adopted Protestantism and adat tradition coexist happily here, since even the Dutch missionaries quickly realised they had no hope meddling in the elaborate burial traditions that lie at the heart of Torajan society. 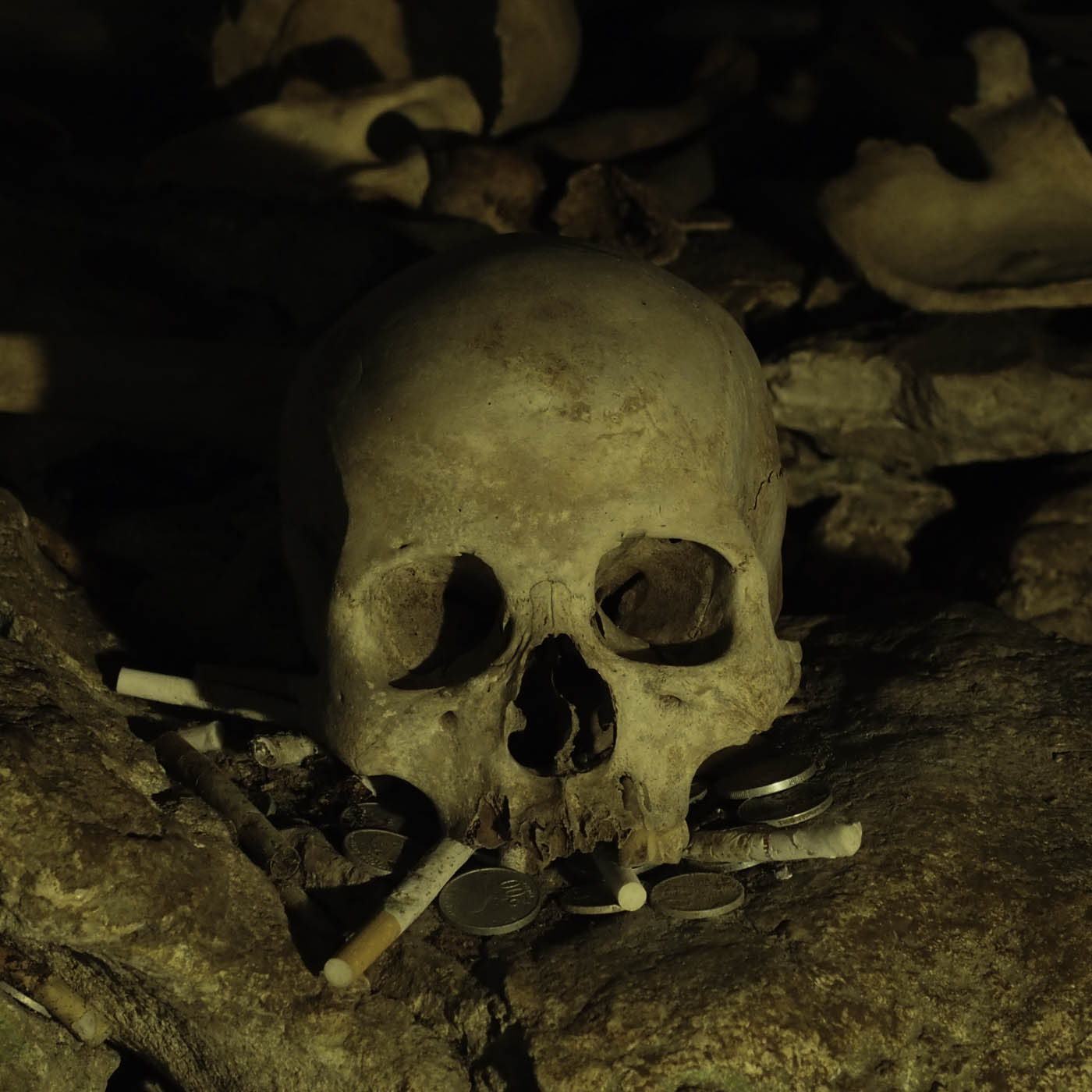 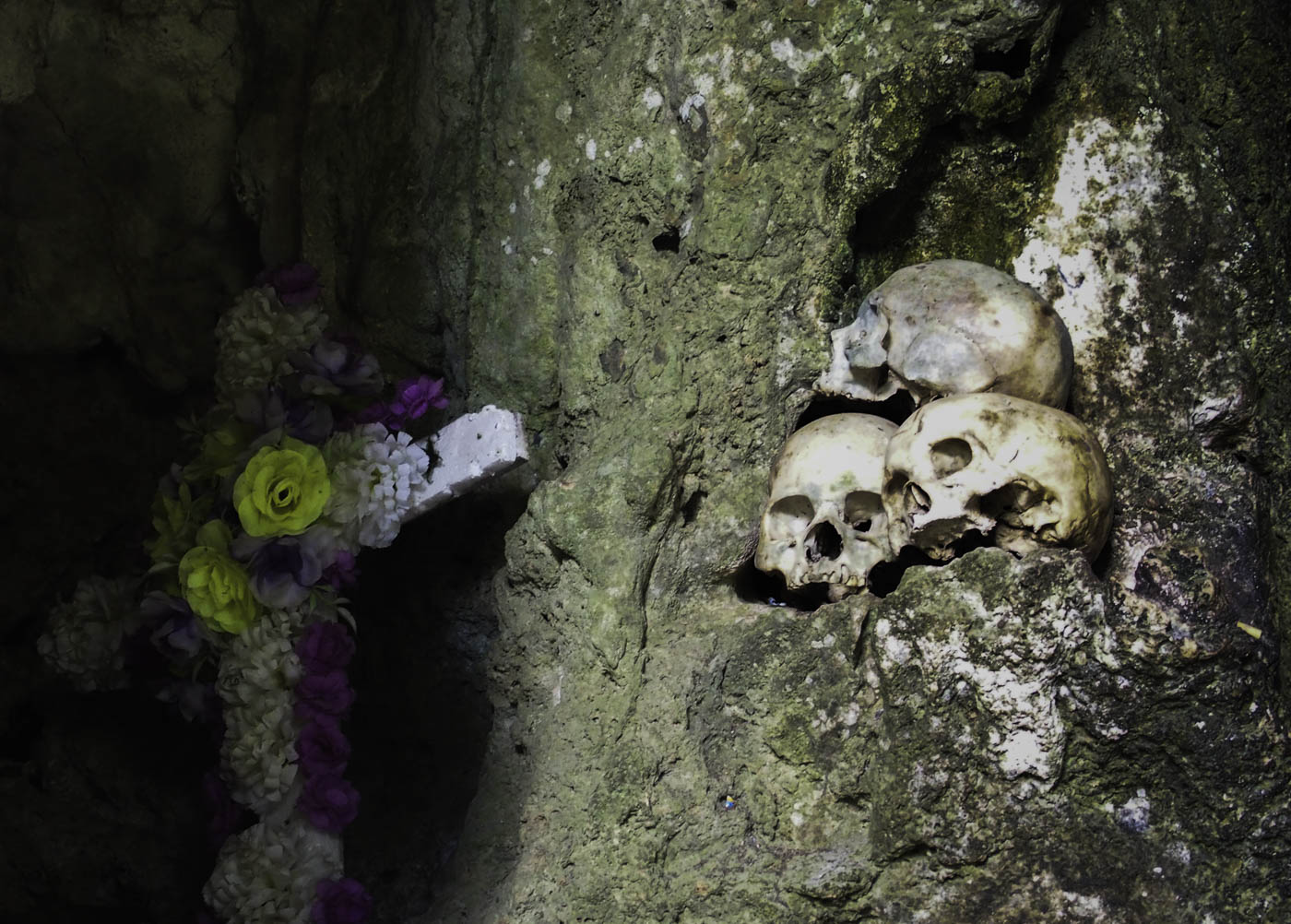 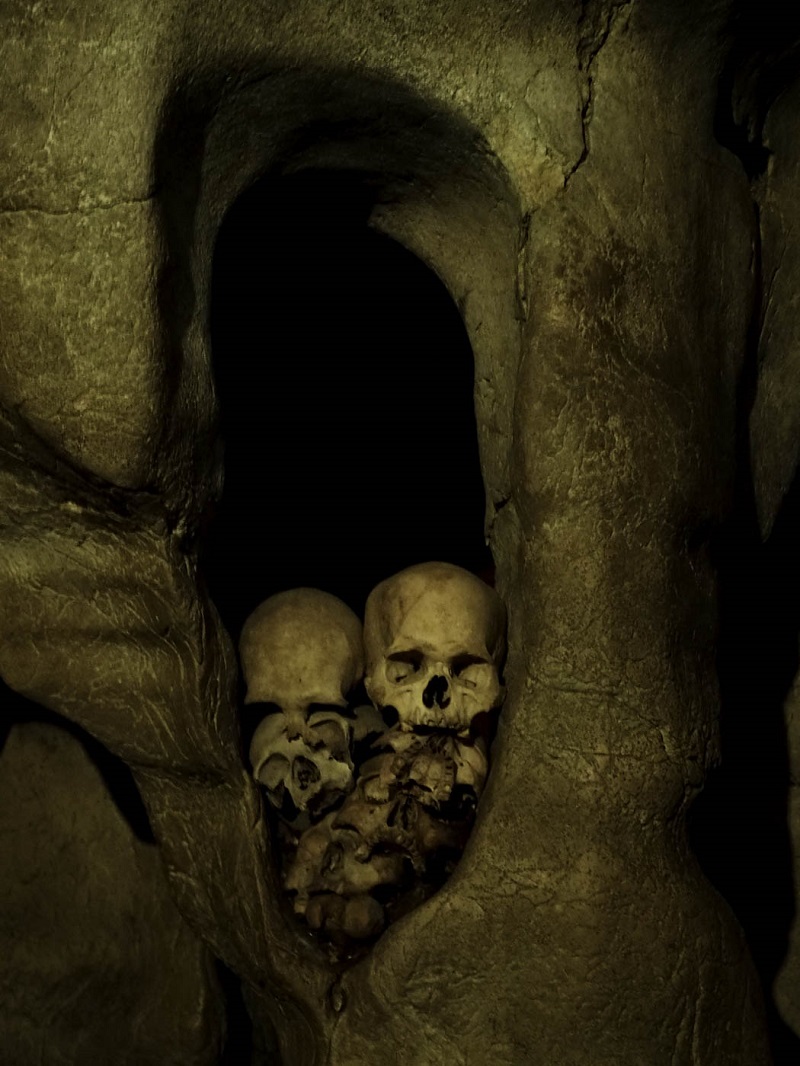 At the entrance to the cave coffins old and new are suspended from the cliff and stacked up on each other, the latter marked by crosses and the former elaborately carved, often to resemble buffaloes which are believed to carry the dead into afterlife. Our guide Susilo, who is a member of the clan that is buried in these caves, explains that the Toraja have taken to keeping bodies in caves and suspending them from cliffs to keep them safe from plunderers, since the dead are buried with their valuables.

The tau-tau, wooden effigies carved in the likeness of the deceased, are arranged in rows along a wide wooden balcony above the entrance to the cave, watching us with inscrutable expressions. Some are ancient and crudely carved, with round heads and staring eyes, but the newer ones are eerily life-like and bear a close likeness to the deceased. They are believed to protect the dead and watch over the living, and are perhaps at their most impressive at the burial sites in Lemo, a carved cliff face where a squadron of them guards the ornate square doors of family tombs. 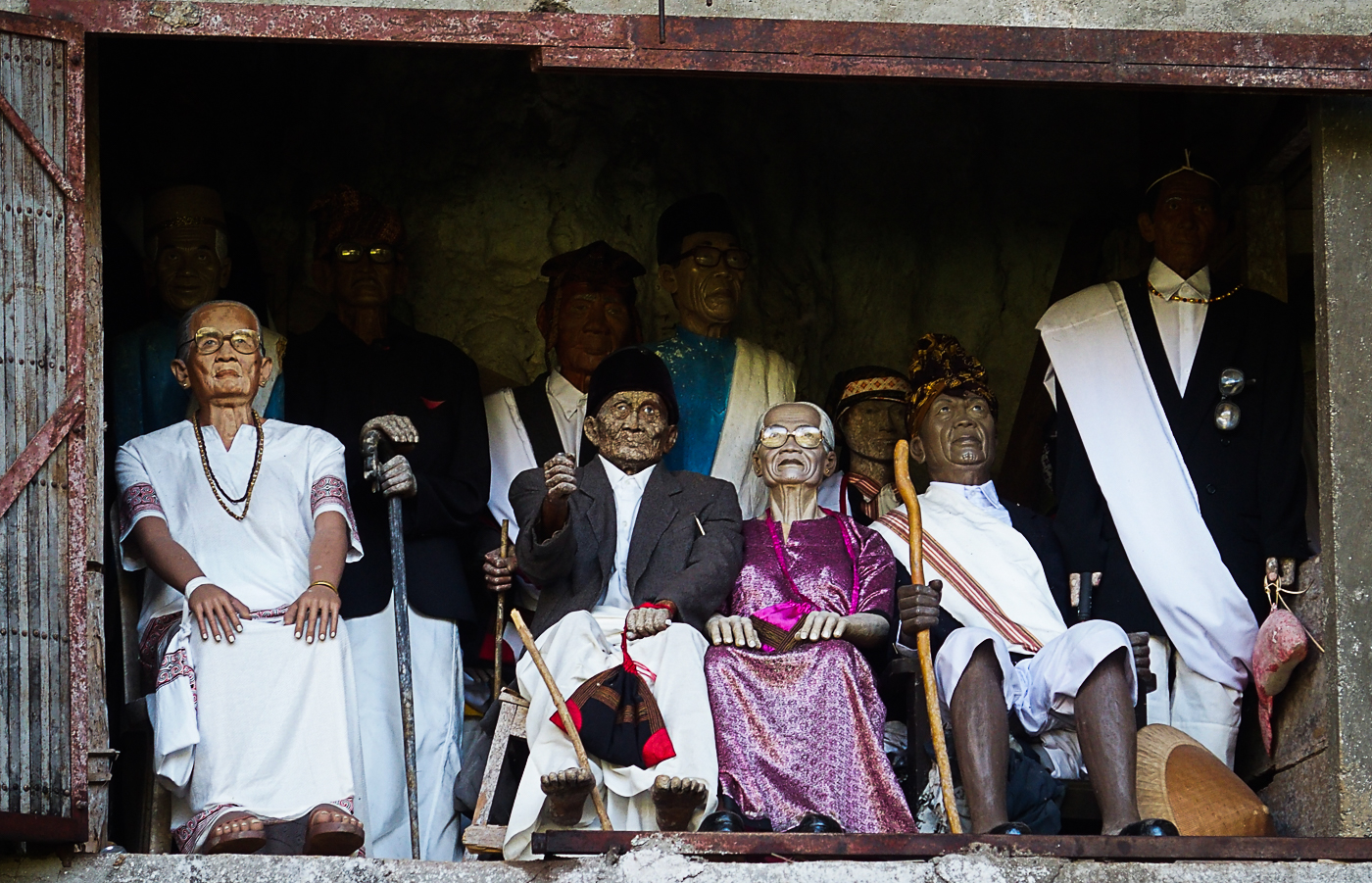 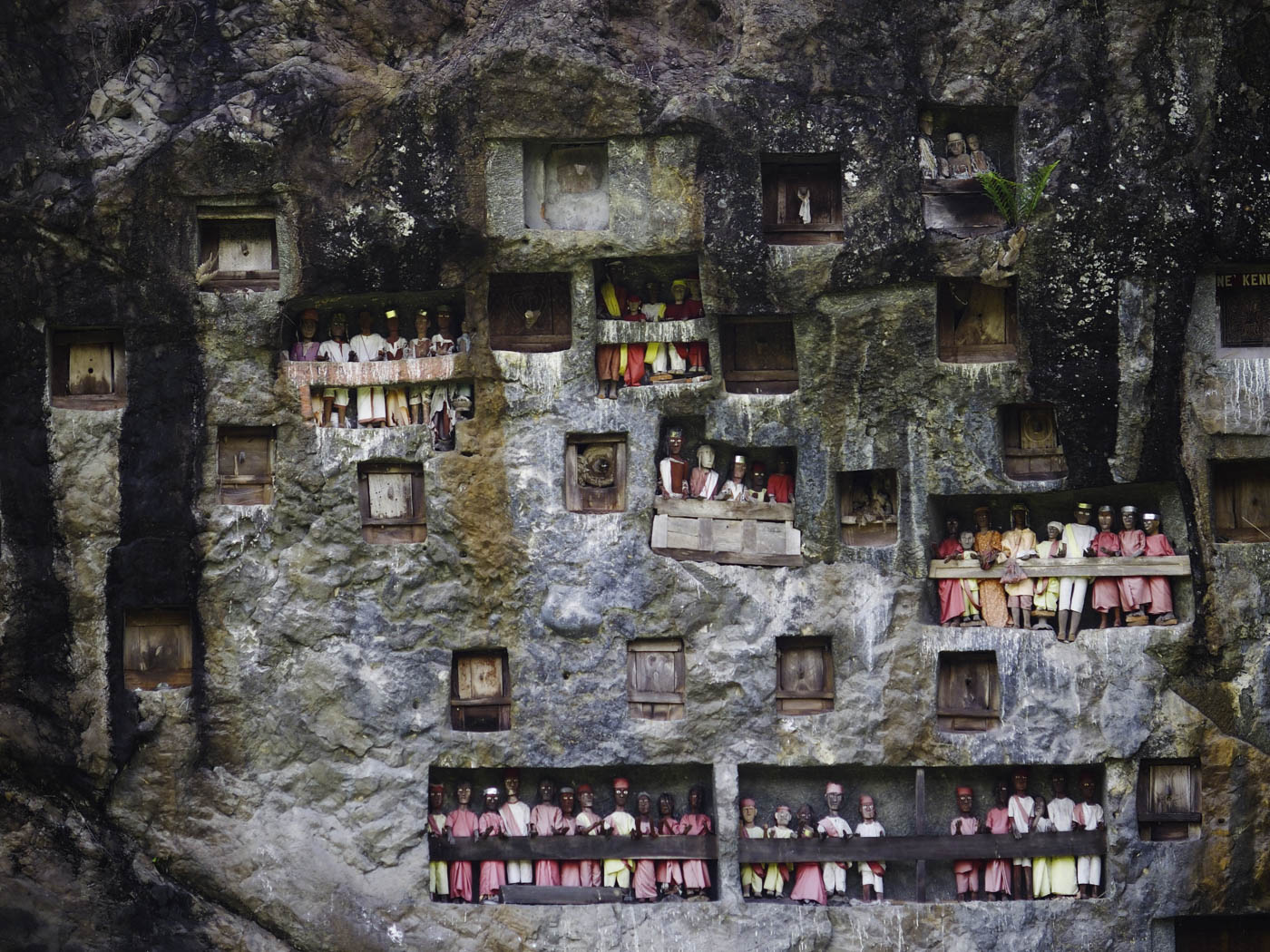 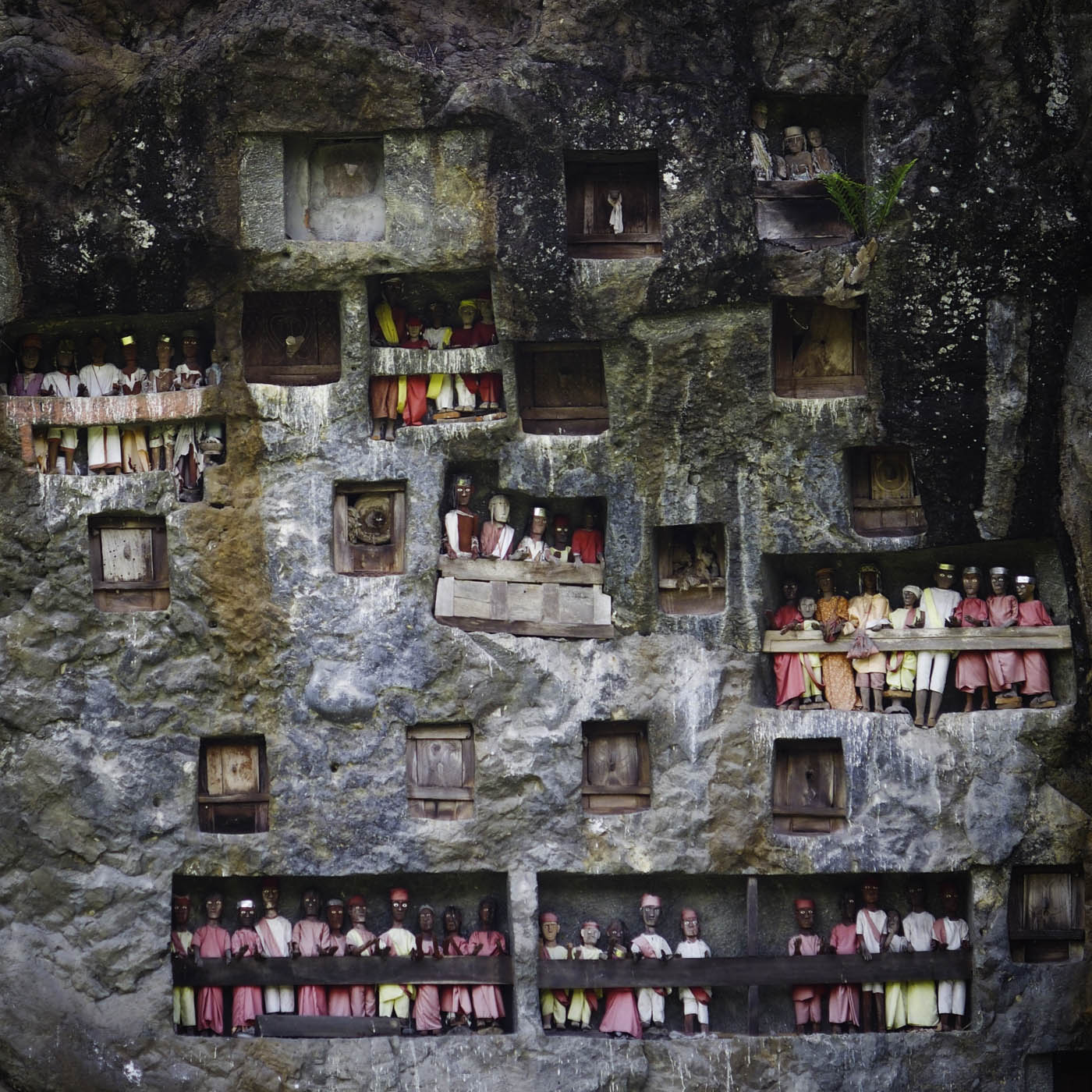 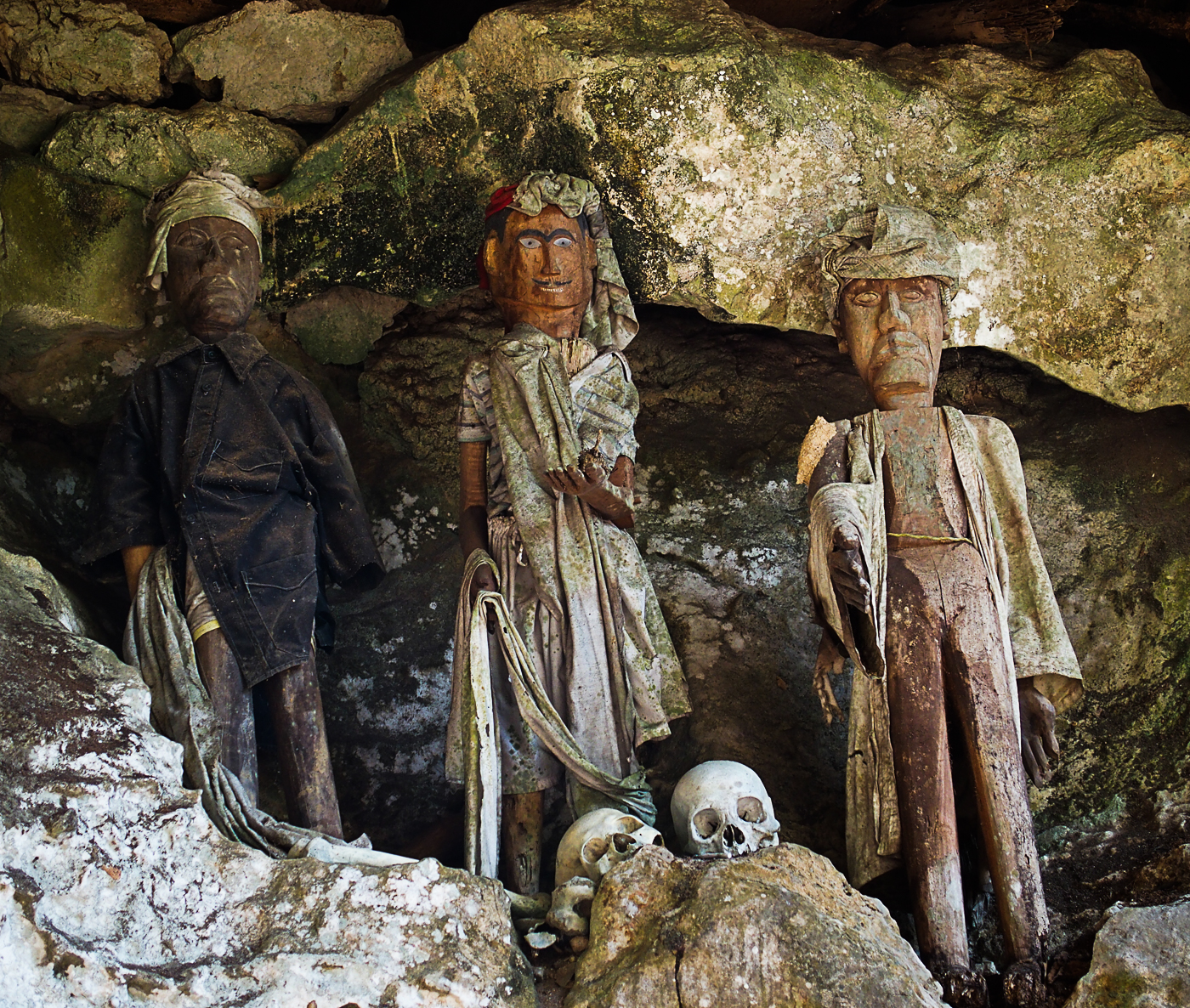 Death is integrated into the Torajan life and landscape. As devout Protestants, most Toraja nowadays hold a Christian wake at the death of a relative. After that, the ancient rituals take over – the body is embalmed and kept in the house, clothed, spoken to, served food and taken care of like a sick relative. It is not until the first buffalo is slaughtered that the person is considered dead, and it can take a long time for the family to be able to afford enough buffaloes to send their dead to the other side in style. A buffalo costs 2500 euro, and the praised albino ones even more. Paying for the funeral involves pooling money from the whole family, calling in old debts and creating new ones. This web of debt and favour, logged for generations in family books, holds together Torajan society and perpetuates the traditions. The whole village spends weeks or even months building pavilions for the hundreds of mourners that will attend the burial, and the many slain buffaloes and pigs are eaten at the end – the dead, after all, only need their spirit to guide them. 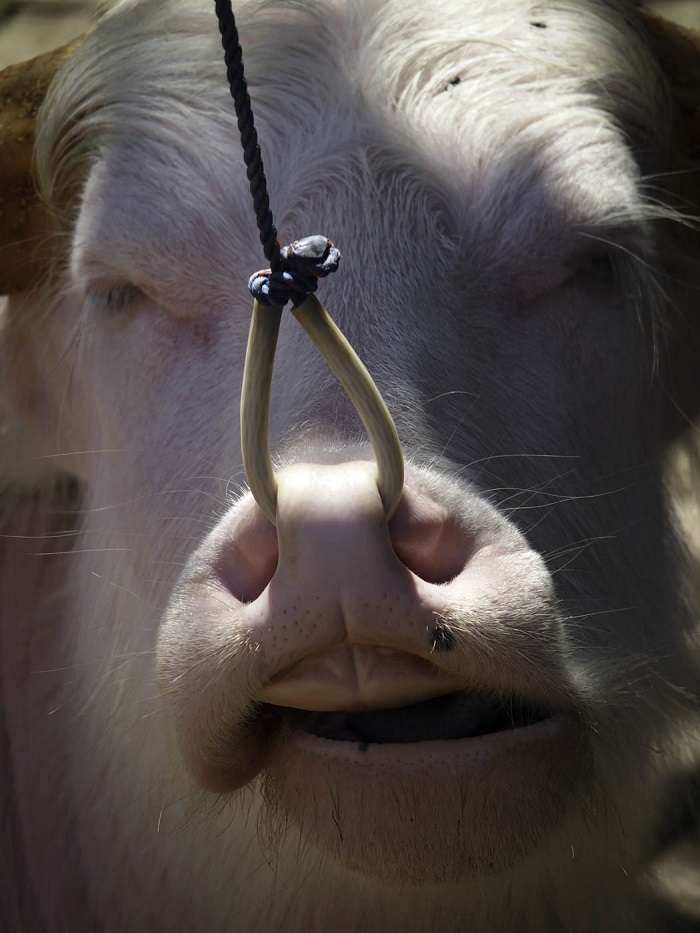 Every few years the Ma’Nene ritual takes place, in which the bodies are taken out of their burial chambers, washed, and dressed in new clothes. In a custom both touching and profoundly disturbing to many outsiders, babies who have died before cutting their first tooth are buried in the hollowed-out trunks of living trees, so that the child's spirit can return to nature and grow with the tree. Walking through an ancient forest, small palm fibre doors on trees mark their graves.

Grief at the loss of a loved one may be universal, but our response to it is imbedded in the culture and its belief system. In Toraja society cremation is reserved only for the worst sinners, the taboo-breakers, and we are undoubtedly savages in their eyes for doing that to dear old granny, as well as for our tendency to push death away, ignore it, and bury it as soon as we can.