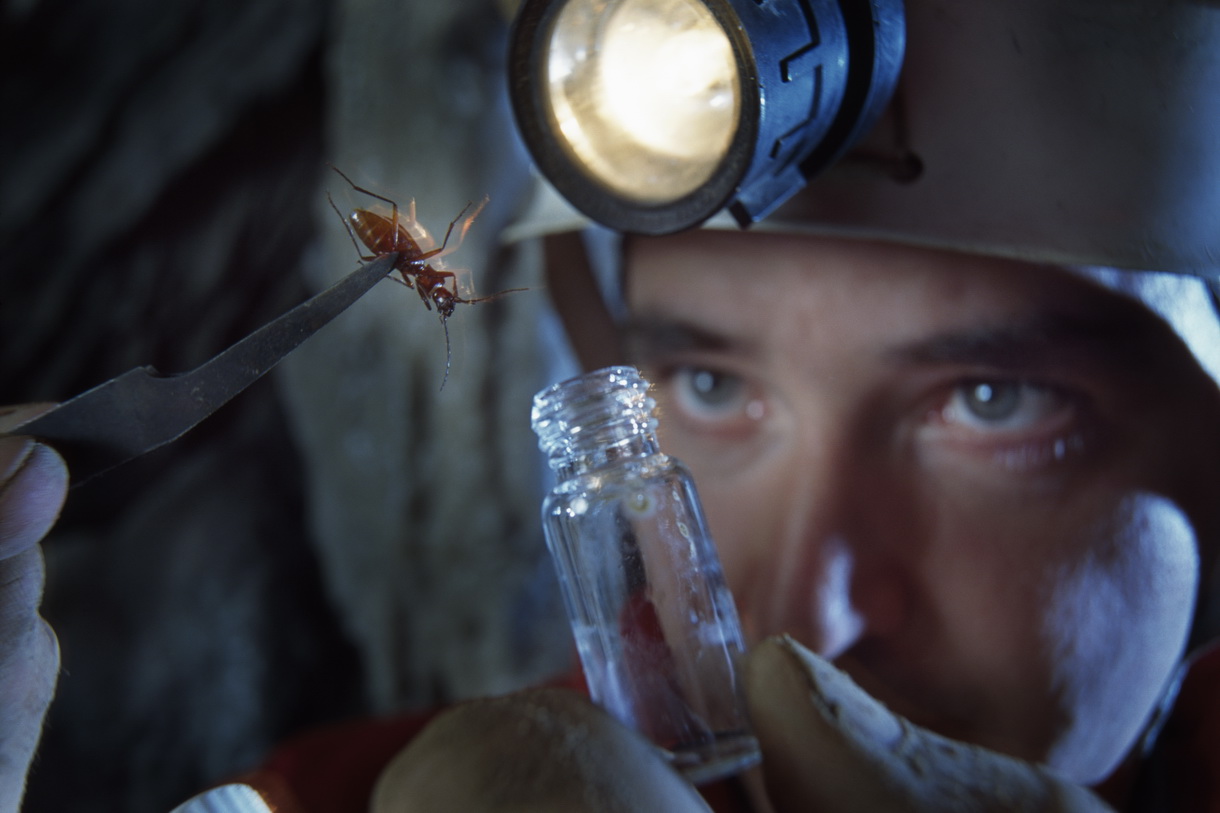 ELVIS LIVES! (But what about Hitler?)

A myriad of people keep seeing Elvis Presley all over the world. Some claim he hasn’t aged a day and that he is still wandering around in the outfit he was wearing as he was leaving his last concert. They swear by it, writing articles about it in puff-piece magazines and backing up their claims with proof on the Internet. Someone once saw him at a wrestling competition; another person is convinced that he is living like Bigfoot in the mountains of the Yellowstone National Park, while yet another person just saw him in Hawaii, accompanied by Bin Laden (who is, of course, still alive as well) and Marilyn Monroe who miraculously hasn’t aged a day either. Usually, we stare at these “eyewitnesses” for a moment or two, think whatever there is to think about such people, and forget about them in a heartbeat. But if someone is strenuously claiming that Hitler himself is hiding in secluded karstic caves around Celje, that’s a whole other (suspicious) story altogether. What comes to mind are labyrinthine hideouts of fanatical Islamists, ready and waiting to attract the ire of a certain world leader with an orange squirrel tail atop his head. Is it possible that the malevolent axis of evil originating far away, in Afghanistan, made its way through Iraq and Palestine only to culminate somewhere around the spa of Dobrna in the Štajerska region? Who knows ...

Obviously, this issue was a matter of national interest of the highest order: as can be confirmed by anyone who knows me, I’m not fooling around when it comes to that. Hitler in Celje! Actually, not far from Velenje, in the vicinity of Vinska gora: the name of the location (Wine Hill) could have a detrimental impact on the credibility of the information in and of itself, but the whole situation is nevertheless definitely something we must get to the bottom of. And if Hitler did actually live in Slovenia, he surely would have chosen a place not far from Maribor, the unfortunate town where he once stood on a balcony and pronounced the well-known phrase: “Make this land German again!”

At any rate, there aren’t many people in the world who’d be able to catch a man of such calibre as “our Dolph” (used to be?); in addition, there were numerous hints leading me to Postojna, into the lair of the former Yugoslav army. Specifically, through the doors of the Notranjska Museum which is the workplace of Slavko Polak, obviously a cunning and elusive person who managed to infiltrate this provincial yet at times oh-so-conspiratorial town in spite of the fact that he lives in Ljubljana.

He immediately got to the point. It seemed clear that this would not be his first rodeo: “Don't worry, we’ll get him!” he said, calmingly. There seemed to be no doubt in his mind: Hitler lives somewhere around Celje, so there! No time for discussions, no superfluous questions.

A couple of days later, the hunt was on. I heard “Herr Slavko” mumbling something about having obtained a degree in biology but I wasn’t taking him at face value. Nowadays, a war criminal hunter has to be as sly as a fox; if one wants to check the true identity of such a weirdo, a genetic test could come in handy as well. Be that as it may, it seemed that Slavko was a sort of biology-oriented Simon Wiesenthal.

In the parking lot of a derelict pub, we put on our caving equipment. Slavko also put on a helmet which looked remarkably similar to my grandmother’s bedpan, whose purpose to me remained hidden for a long time: since I was a civilised child, I had no idea what that thing under the bed could have been used for. I admit that I somewhat missed a whip, or at least a hat worthy of Indiana Jones who also loves to trudge around weird caverns and ravines, but I guess you can’t have it all. I peered into Slavko's trunk, barely able to contain my excitement. In my mind, I could already see the razor-sharp, well-oiled trap (at least bear-sized!); I could already hear the rattling of the forged chains we’d use to secure it to the cave floor. Alas, there was nothing of the sort to be seen. Instead, Slavko pulled a couple of empty yoghurt pots out of his bag, along with a bottle filled with a strange liquid: green filaments were floating through it like days-old tubercular snot.

“This trap is my own recipe! A secret one!” Slavko shoved it all in my face with an enigmatic smile. And I finally understood his brilliant plan. Even a person like Hitler cannot remain indifferent to the infamous drinking habits of the Štajerska region. Especially when we’re in the vicinity of Wine Hill. Slavko’s plan was obviously to set out little cups throughout the cave with an irresistible mixture of moonshine, schnapps and who-knows-what other intoxicating substances. Our future victim might empty one of those cups and... Now that is a true, well thought-out trap, worthy of every authentic (or at least naturalised) Styrian!

In the cave, we filled the yoghurt pots with the stinky pee and buried them to the brim in soil.

“You’ll see, he won’t be able to resist it!”, said Slavko. Following the Latin maxim “de gustibus non discutandum est”, I just nodded and kept my thoughts to myself.

“We’ll be back in a couple of days: I’m sure we’ll catch him!” From your mouth to God’s ears, Slavko... And we went home. Upon a tacit agreement, we skipped the Trojane doughnuts and stopped for a beer instead. After all, the best way to get close to your enemy is to put yourself in his shoes, acquiring his habits.

Those “couple of days” turned into a month and I could hardly wait to get back to the caves of the Štajerska region. The same parking lot, the same derelict pub, the same beer, the same mission. Slavko put the bedpan back on his head, turned on his carbide lamp, and the darkness of the underworld near Vinska gora engulfed us again. He routinely found the first yoghurt pot and peered inside it: nothing. It was empty! So was the second one. When we got to the third pot, though, his face lit up with a blissful smile and he was visibly relieved.

“We've got him!” he exclaimed joyously.

Who knew what he was talking about ...

“He’s here, look!” said Slavko, pointing his finger toward a black speck at the bottom of the cup. It looked somewhat like a squashed blowfly that sometimes floats by in your soup in cheap restaurants. I’m familiar with the Slovenian idiom describing an extremely drunk person (which directly translates into someone “having looked too profoundly into a glass”), but I've never seen anyone fall so deeply into a cup as Slavko did.

“That's HIM! Anophthalmus hitleri, the Slovene autochthonous species of a cave beetle!”

Suddenly, the whip and the hat seemed ridiculous, like they would maybe have been a bit much, and I instantly saw Slavko in a brand-new light. Well, I actually saw him for what he was: a biologist and a scientist interested in cave animals. Being the enthusiast that he is, he’d probably also be interested in cave plants; lucky for us, there are none in the underworld ...

In 1933, the Slovenian naturalist Vladimir Kodrič discovered an unknown cave beetle of the genus Anophthalmus in a cave in the surroundings of Celje. He asked Oskar Scheibel, a reputed collector, merchant and Germanomaniac, to help him determine its species. Scheibel was immediately convinced that Kodrič had discovered a new species; however, he wanted to make sure of it. Therefore, he delayed publishing the news for a while and, in the meantime, called the beetle Anophthalmus kodrici, to honour the person who’d discovered it. Four years later, in 1937, Scheibel was convinced that the animal truly belonged to a species that had not yet been discovered or described. But tide had turned in the meantime, and Adolf Hitler, a new chancellor, was already excelling in Germany. Scheibel forgot his initial promise to name the beetle after Kodrič: since he was a great admirer of Hitler, the scientific name he gave the beetle was Anophthalmus hitleri. He even sent a letter to the chancellor’s office in Berlin, notifying them of “his” discovery and of the beetle’s new name, and receiving a polite thank-you note in return. Shortly after that, the Second World War started, and Scheibel's son joined the Gestapo. Right before the end of the war, the embittered Scheibel escaped to Austria with the retreating German army, taking along his rich beetle collection. Nowadays, the precious holotype (the first specimen known to have been used to formally describe a new species) of the Anophthalmus hitleri beetle can be found in the Natural History Museum in Basel, Switzerland. According to the taxonomy of Linnaeus describing the classification of animal and plant species, the official name that a species has been given to accompany its first scientific description must not be changed at a later date. Thus, this Slovenian beetle is the only representative of an animal or plant species in the world that has kept its interesting politically motivated name. Due to its unusual name, the Anophthalmus hitleri is particularly sought after by insect collectors: the specimen prices are extremely high, and it is especially appreciated among German neo-Nazis.