When my cell phone, which was semi-intentionally hidden away somewhere so that I would be as difficult to reach as possible, rang (again!!!) on holiday this year, I had no choice but to answer. It was my friend Igor Savič whom I've known for about 20 years and all this time we’ve also cooperated well on various business-related projects. I have to say his news surprised me and made me think. A day before, while diving on the island of Pag, he and his friend and dive buddy Vedran Dorušić had discovered one of the most interesting diving locations found in recent years. They were exploring some rather uninteresting seamounts in the immediate proximity of the Foka diving centre, run by Vedran himself. New diving locations are always welcome for any diving centre, but they weren’t even remotely expecting such an epochal discovery.

When they approached something that seemed like a big pile of dark rocks, they were astounded to find it was a large heap of amphorae. One look and they understood that they were the first divers to behold this entirely untouched site, as there were no traces of any amphorae having been taken away or dug out from the sand. The joy was immense; every diver who spots something similar knows that this is outstanding luck and happens only to a select few. After the dive, they immediately reported their finding to the Croatian cultural heritage protection administration in Zadar, which instantly issued a decree prohibiting approaching the site. Underwater archaeologists quickly conducted the first expert inspection and archaeologist Dr Irena Radić Rossi estimates that this Roman ship sank around the first century BC and carries a load of 600 to 800 untouched amphorae type Lamboglia II. These amphorae were mostly used to transport olive oil and sometimes wine. Some of them have clay stoppers that are still intact, which gives hope that a chemical analysis will be able to exactly determine what was inside. Not far away, a big lead anchor with the inscription Straton has also been discovered. This in itself is a great rarity, as the Romans didn't usually sign anchors—they mostly only decorated them with motifs of fish or dolphins. The meaning of the inscription is for now still a mystery ...

The about 25-metre-long and 8-metre-wide ship had sunk at a relatively low depth of approximately 35 metres, which raises high hopes for more serious archaeological research that will be undertaken by Croatian archaeologists this year. Meanwhile, the options for suitable protection of the site are of course being examined, because the experience of diving to such a shipwreck is truly unique. The currently preferred option includes archaeologists digging only small trial trenches to gather valuable information and leaving everything else as it is, so that diving enthusiasts and archaeologists can then visit the sunken vessel. Naturally, the safety and preservation of the site come first, and cutting-edge electronic surveillance will be put into place to ensure the site is under surveillance throughout the day.

We agreed that the photographs would mostly remain unpublished for now, which is why I can only show you one in this hive post. But worry not, new and longer posts will follow very soon, giving you the opportunity to take a closer look. 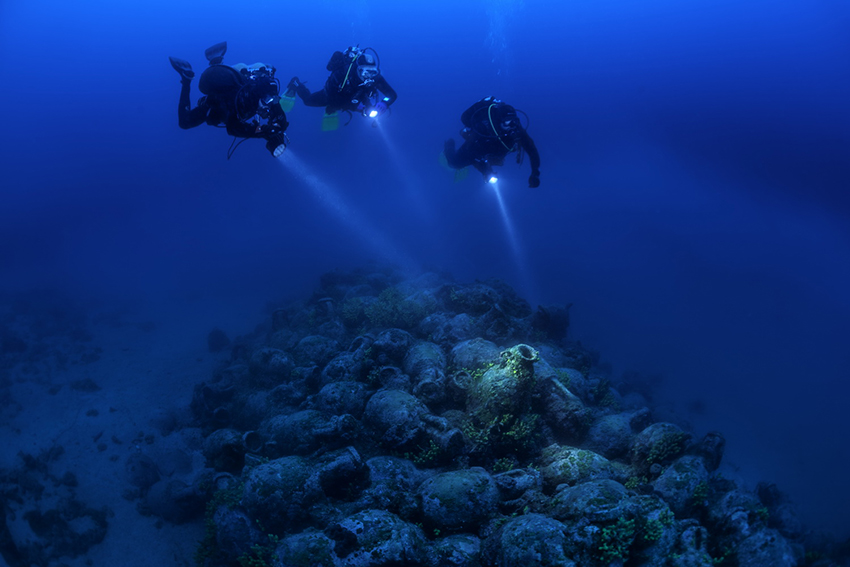