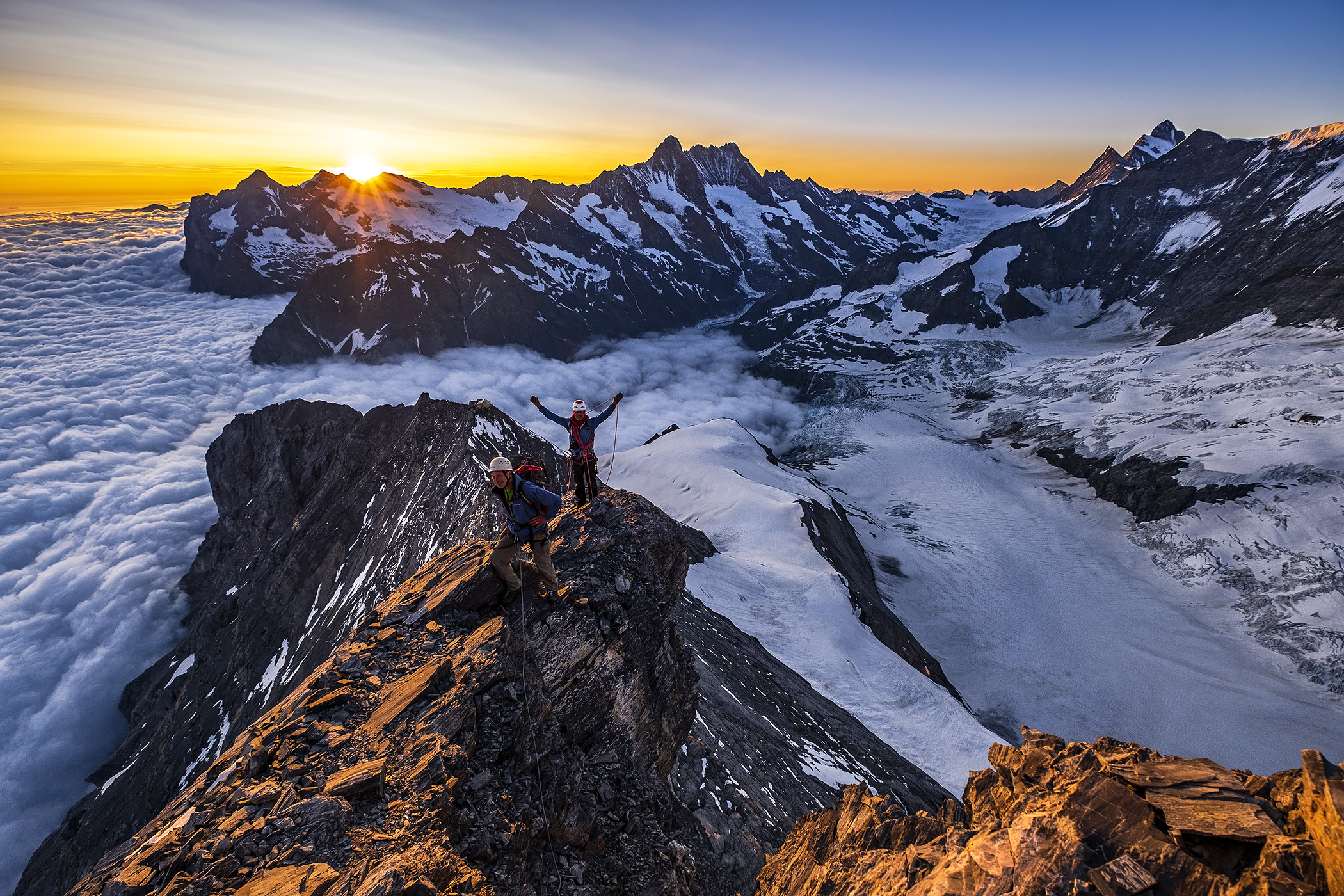 Every year, we move to Chamonix for the summer, and this year was no exception. My wife and I call it working, while our daughters Mija and Ula call it vacation. Their grandmother Anka always comes with us: she helps transform our stay in Chamonix into real vacation time for the girls, while my wife and I are making sure to actually do some work in the mountains. The procedure runs smoothly every year, and we’re happy with it.

Nice summer temperatures, interrupted by short spells of bad weather, made sure that the summer went by quickly and in an extremely predictable manner. We practically didn’t need to look for any substitute climbing goals since the weather always allowed us to climb the main objectives we set for ourselves. There were a lot of well-known routes and mountains, but I always try to add at least a few directions I’ve never climbed before, or ones that I haven’t visited in a long time.

One of the most important mountain guiding tours of this past summer was an ascent over the Eiger Mittellegi Ridge. The Eiger is a mountain known to everyone, both mountaineers and many people who don’t go to the mountains. Its 3,967 metres are nothing special for the Alps; however, it does have an extremely high north face, perhaps the highest in all of the Alps, towering over the valleys of Lauterbrunen and Grindelwald. In itself, this would not have been anything particularly important either, if mountain climbers hadn’t start indicating their interest in the north face of the Eiger during both world wars. The first noteworthy attempt at climbing this direction was recorded in 1934. After that, a string of attempts followed until the summer of 1938 when an Austrian and German climbing team managed to climb the wall. In the meantime, dozens of climbers died right in the sight of tourists scanning the wall from their hotel rooms using binoculars.  One can read a lot about the successful ascent. The best-known book is probably “The White Spider”, written by Heinrich Harre who detailed most of the tragedies that have happened on this wall. Nowadays, mountaineers most often climb the Mittellegi ridge, rising above the north-western wall like a blade, which also has an interesting, albeit much less-known history.

Its most unusual part begins even before the successful ascent, since several climbers came down from the mountain using the ridge.  I don’t know where they got the idea, never mind the courage, to descend into the unknown along such an exposed, sharp ridge. Even today, when the direction is visited relatively often and is rather well-equipped, practically no one uses it to descend. The first mountaineers who managed to climb the ridge going upwards were Yuko Maki from Japan and three Swiss guides by the names of Amatter, Brawand and Steuri, in September of 1921. Before that, many unsuccessful ascents were attempted; all were discouraged by the so-called tall tower in the upper half of the direction. In order to successfully climb over the tower, the four men used a rather unique (and, from the modern point of view, controversial) technique. They brought along a 6-metre wooden pole with a metal claw on its top; by propping the pole against the wall, they used it to climb higher. In spite of this well-thought-out tactic, they needed eight hours to climb 200 metres, arrived at the top at night and then quickly started descending along the western ridge.

In 1926, Yuko Maki and Amatter climbed the ridge once more, whereby the former then continued his mountaineering career elsewhere. Among others, he also led the Japanese expedition which was the first to climb to the top of Manaslu (8,156 metres) in the Nepal Himalayas. Since the idea of having climbed the ridge made him so happy, Maki gave 10,000 Swiss francs to the mountain guides from Grindelwald, who then used the money to build a small cabin at the shoulder right before the beginning of the top ridge. Nowadays, the cabin still serves as the starting point of the ascent.

The last time I was there myself was about ten years ago, which is why I was looking forward to it. I remembered the ridge was beautiful, sharp, and rather exposed. What I saw, though, was better than what I remembered. The wonderful day started at 4 in the morning. In the light of dawn, we climbed over the first sharp parts of our ascent and were soon bathing in the first rays of sunshine. Climbing over the firm rock, filled with climbing grips, on the sharp ridge, while towering over the sea of fog and the rising sun, definitely provided the most intense mountaineering feelings of this summer. This wasn’t the most arduous or the hardest ascent of the summer; it was, simply put, a beautiful one. Nothing could be said against the moments spent up there. Since I had two guests, Franco and Nick, who I've been climbing with in the Alps every year for quite some time, I invited my friend and colleague Marko Prezelj to tag along, due to the degree of complexity of the ascent. Marko is an exceptional photographer and his photo (below) shows the perfection of the moment, confirmed by the expression on mine and Nick's faces.

With such a burst of emotions, we continued our ascent nearly ecstatic and reached the top in less than four hours. The descent leads mountaineers over two high saddles and the sharp ridge between them, all the way through to the cabin located above the famous saddle of Jungfraujoch with the highest railway in Europe. The descent takes longer than the ascent to the top of the Eiger Mountain. Usually, I descend quickly, by trying to carry out all rope manoeuvres as fast as possible, thus compensating for the exhaustion of my guest. Franco and Nick were also tired, and most teams overtook us, but Marko and I were still taking our time. And suddenly, nobody was “chasing” us anymore. The weather was still beautiful, and as both teams stopped for a snack on the northern saddle of the Eiger mid-afternoon, right before crossing the last glacier before reaching the cabin, I was sad that such a perfect day was coming to an end, even though at that point, we'd already been climbing for 10 hours. Whenever I’m guiding a long tour, I’m always happy to see it end, to reach the safe and comfortable cabin, and to see that my guests were having a good time. This time around, it was different; I’m not sure why.  I was peacefully basking in the mighty surroundings, enjoying the warm afternoon sun, and wishing for the beautiful climbing experience to last.