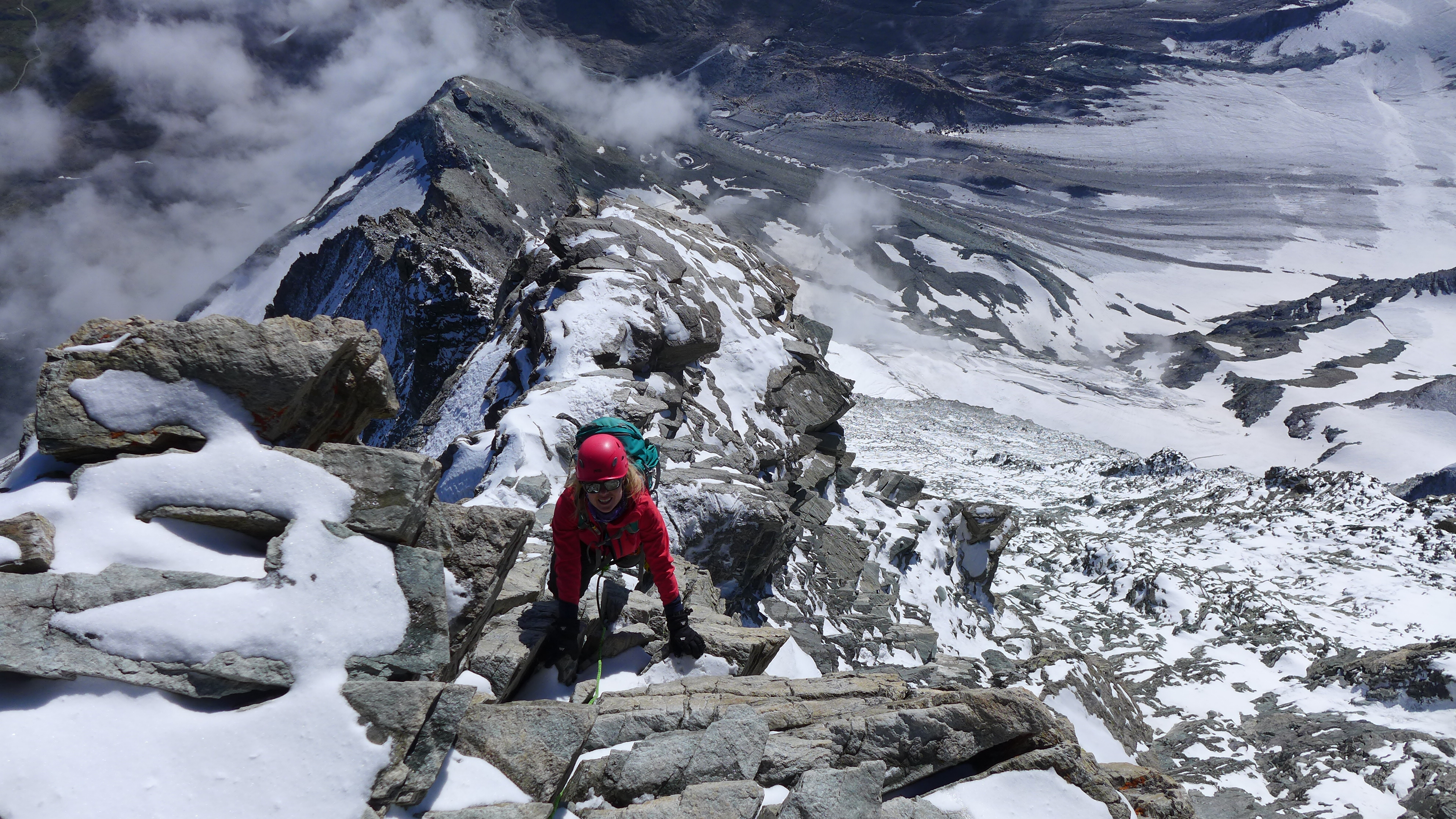 The Matterhorn, the most beautiful in the world?

The Matterhorn is the most iconic mountain in the world. Although beauty is in the eye of the beholder, we can also safely place it among the most beautiful mountains. The fact that it’s used as a reference name for numerous summits only confirms it: Ama Dablam in Nepal, Jalovec in Slovenia, Klein Matterhorn in the immediate vicinity of the big Matterhorn, etc.

The mountain indeed looks beautiful and symmetrical, like a petrified lion. But mostly from the Swiss side, from Zermatt. This cosmopolitan skiing and mountaineering resort owes its reputation and large number of visitors especially to this wonderful mountain.

As befits a mountain bordering two countries, the Matterhorn has several names. The one already mentioned is used in Switzerland where Matter means “meadow” and it thus refers to a mountain above meadows. It could be argued that the name is not very original for a mountain with such a unique shape. On the Italian side it’s called Cervino which is supposedly just an incorrect variation of the original local name Servin. French-speaking Swiss people also call it Cervin.

Drama of the first ascent

The wish to climb such a high and beautiful mountain is anything but unusual and there were numerous attempts to do so. Nonetheless, the peak of Matterhorn remained untouched as the last one of the high summits of the Alps. It only makes sense that such a magnificent mountain has a dramatic story about first attempts and the first successful ascent.

In 1860, 20-year-old Edward Whymper visited the Alps as an artist hired to depict the mountains on the border between Italy and Switzerland. Soon after, Whymper became interested in mountaineering and the ambitious wish to climb the still unconquered Matterhorn came to the forefront. On one occasion he met Jean Antoine Carrel, an Italian mountain guide from Valtournenche, a valley below the Matterhorn, and hired him for an attempt to reach the top. Carrel often worked for an Irishman by the name of John Tyndall. A fierce competition between the two men took place and later also between them and Italians. Carrel and Tyndall tried several times to ascend along the southwest ridge from Cervinia and, during their best attempt in 1863, they reached an over 4200-metre high ridge shoulder that has since been named Pic Tyndall. Between 1861 and 1865, Whymper and Carrel also made several attempts before parting ways because of Carrel’s patriotic conviction that the first conqueror had to be a local and not an English tourist.

In the meantime, other Italian alpinists such as Sella, Gastaldi and Giordano, also understood that a serious attempt to ascend the mountain should be made to uphold Italian mountaineering honour. The blow from the first ascent to Monte Visto by an Englishman needed to be softened. The preparations started and apart from other five mountain guides also included Carrel. Just days before the scheduled Italian attempt, Whymper managed to convince him to try climbing it with him one more time, this time from the Swiss side, but the weather wasn’t appropriate for climbing until 11 July when the contract expired. Whymper wanted to extend the contract but Carrel refused as he already had an agreement about an attempt from Cervinia with Giordano and Sella.

Whymper decided to try from Switzerland all the same but couldn’t find a porter. While searching for one, he found Francis Douglas, who’d made the first ascent of the Ober Gabelhorn not long before. He told him about his problem and revealed the plan, after which Douglas joined him excitedly. They went to Zermatt past the Theodul pass where they found a guide, Peter Taugwalder, and encountered two other Brits, Charles Hudson and Douglas Hadow, eager to climb. One of them already had a mountain guide, Michel Croz. All six of them, together with two porters, began their ascent on 13 July 1865 at 5.30 am from Zermatt. By noon they had reached 3400 metres and prepared a bivouac. Croz and Taugwalder Jr went on to explore the area and returned at 3 pm with news that the terrain was passable. The next morning, they continued at dawn and at 1.40 pm reached the top they had so badly desired to conquer. The joy was even greater because they didn't notice any traces of Italian climbers' success. A bit later, they spotted from the edge the Italian climbers far below them, ascending the southwest ridge. To warn them of their presence they sent down some stones. The Italians noticed them and couldn’t hide their surprise. The shock was so big that they turned around without saying a word and descended into the valley.

The winning climbing party remained on the top for an hour. They started to descend on the same rope. After an hour of careful descent, Hadow, who was the least experienced, slipped and fell on Croz who was leading the way. He wasn't prepared and couldn't hold the fall and so they pulled Hudson and Douglas down into the depths as well. Seeing their companions falling, Whymper and Taugwalder tried to prevent the fall, but the rope suddenly broke and all four fell down the mountain in front of their eyes. They continued their descent in shock until the next morning when they arrived in Zermatt. In the following days, a rescue operation was launched and the bodies were found on a glacier below the north face of the Matterhorn.

Apart from the route of the first climbers, there are now numerous other climbing routes leading to the top. Let’s take a closer look at the most important ones. Matterhorn has four main ridges. The northeast Hornli ridge was used by Whymper and his mates for the first ascent. Today, this is the most frequently climbed route. It’s a very long route as the climbers have to climb 1220 metres of altitude from the Hornli cabin to the top. Technical difficulty is not extreme and mostly around grade III but it doesn’t get easier on the way to the peak, only harder. The difficulties have to be addressed quickly and continuously and it’s necessary to have a good sense of orientation on the steep terrain. As soon as your foot leaves the right route, you find yourself in a very friable wall. At least 80% of the people you’ll share your living space with in the Hornli Hut, which will reopen this year after a thorough renovation, will climb it with a mountain guide. These will mostly be local guides known for their lack of kindness to fellow people on the mountain. Of course, there are also exceptions! On average, the ascent of this route takes experienced climbers who are up to the challenge 4 to 5 hours and the descent at least one hour more. The saying that reaching the summit is only (or not even) half of the way definitely holds true for the Matterhorn. Most accidents on the Matterhorn happen during the descent when the level of concentration decreases due to fatigue and it’s difficult to follow the right route, especially after doing the first part of the ascent at night.

Only a few days after the first ascent, Italians Carrel and Bich reached the top from the other side, from Italy, along the southwest ridge, the so-called Lion ridge. The route is a little steeper than the one along the Hornli ridge and is the second most popular route on the mountain. The difficulty of the route is a bit diminished by the higher location of the Carrel Hut (3660 m). The steepest parts of the route (and of its Swiss counterpart, too) are equipped with thick ropes and chains that make the ascent and descent considerably easier.

In 1879, Englishman Albert Mummery and his three mountain guides Alexander Burgener, Augustin Gentinetta and Johann Petrus climbed the mighty northwest edge called the Zmutt ridge. Many estimate that the magnificent ridge route was climbed ahead of time. The climb is reserved for experienced classically trained alpinists who will need 6 to 9 hours to reach the peak from the Hornli Hut or 9 to 11 hours from the Schonbiel Hut. The locals seek to make the route more popular as this would somewhat reduce the rush of climbers at the Hornli ridge. In 1997, a bivouac was built at one third of the route but it only stood there for a couple of years before an avalanche swept it away.

The fourth big Matterhorn ridge is the southeast one called the Furggen ridge that was climbed as the last one only in 1911. It's the most difficult of them all and its difficulty reaches grade six in the rocks. Unfortunately, although the route seems nice, the rock wall in the upper part is treacherous and so there aren’t many mountaineers who would venture into it.

When all the main ridges of the mountain had been climbed, it was time for faces. The most attractive and famous among them is the north face. The steep rocks covered in ice arch over the Matterhorn Glacier and the Zmutt Glacier. As opposed to the Eiger, the face doesn’t have a tragic history, but it earned its reputation with its mightiness, daring beauty and difficulty. After several failed attempts, two young Germans, brothers Toni and Franz Schmid, arrived at the foot of the face at the end of July 1931 after having cycled 500 km from Munich. They successfully climbed the wall in two days. They received loud praise in Zermatt and even won a gold medal during the Olympic games in Los Angeles the following year.

The north face saw the limits of mountaineering surpassed a few more times. Perhaps the most resounding ascent after the first one was the one by Italian climber Walter Bonatti, the conqueror of the most difficult walls and mountains across the globe. The man who always returned, even from situations with the worst weather changes, like the one on the south face of Mont Blanc when most people died while running from the Freney Pillars. He chose this face to be his swan song. Think about it, Bonatti decided he'd stop climbing, but before that he did his best one more time. What an utterly rational move for those times! Is mountaineering not a romantic activity, a way of life, a philosophy …? You can't possibly end something like that as if pressing a button!? Bonatti did exactly that. He climbed a new direct route, solo, in winter on one of the hardest faces in Europe and …? And stopped climbing!

Today the north face of the Matterhorn is one of the so-called last three problems of the Alps (together with the Grandes Jorasess and the Eiger). The difficulty of the Schmid route is not that demanding, it only reaches upper grade five. Nonetheless this route will forever remain, together with the other two abovementioned last problems, at the top of the bucket list of any true alpinist. And rightly so, as it isn't doable without effort and the right amount of courage!