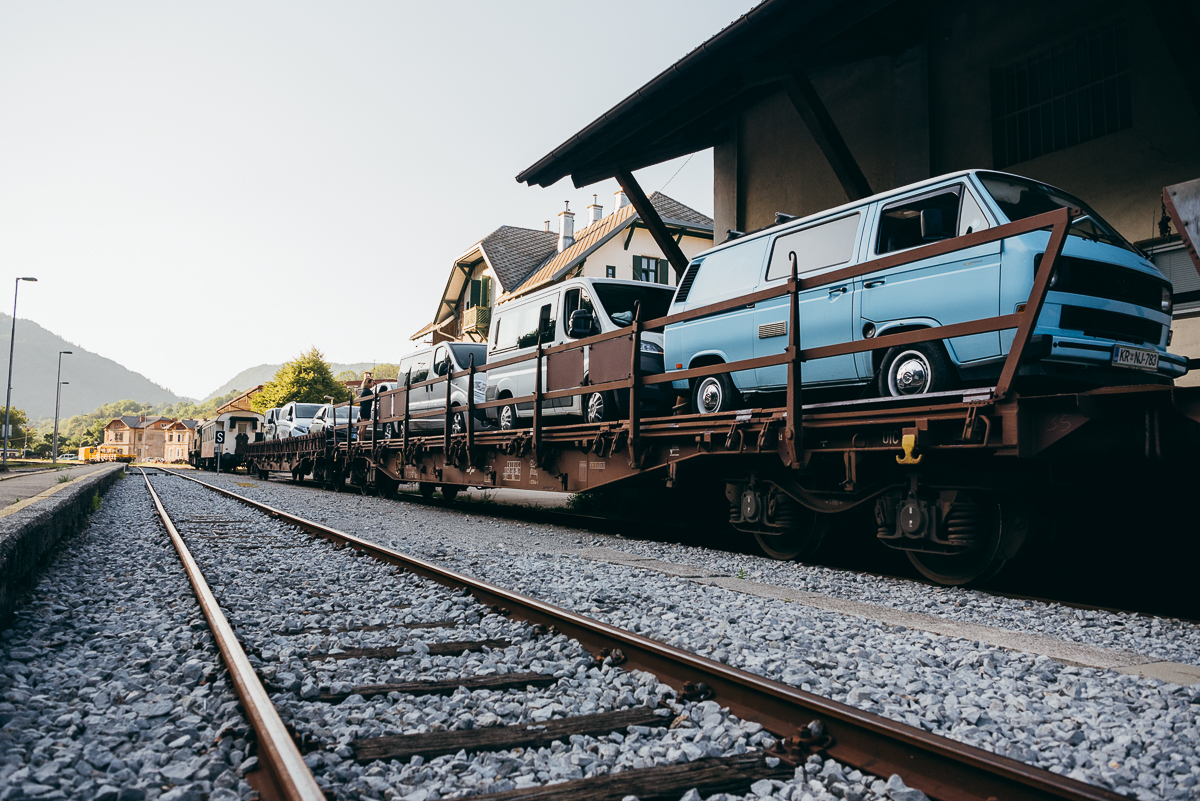 It’s 6:40 in the evening. The old lady is removing the blinds that were protecting her apartment from the scorching sun. A force of habit, probably: she knows that in a couple of minutes, a train will leave the station at Most na Soči for Bohinjska Bistrica, and she’ll be able to assuage her curiosity. The whistle sounds, and the 103 tonnes of the so-called Reagan locomotive at the end of the train composition spring to life. The train moves from the loading track to the plain line track, waiting for that same locomotive to overtake all other cars and regain its place at the head of the train. Precisely at 6:45, it leaves the station at Most na Soči. Just like clockwork, much like any other train...but this one is a bit special. It allows you to enjoy the comfort of your own car and go for a drive, but without having to turn, speed up, or slow down.

Our weekend in Bovec ended a little faster than planned: instead of taking our usual route home over Predel where I’m practically driving on autopilot, I suggested a different, somewhat more scenic, route. We drove through the upper Soča Valley past Kobarid, stopped for fantastic cakes at Kavarna Kasarna in Tolmin, and ended up in Most na Soči, where one can take a motorail train four times a day. Since there aren’t enough places left on the train sometimes, it’s best to be at the station about an hour before the train leaves. Make sure to be there at least 20 minutes beforehand, however, since loading the cars takes quite some time.

After loading the train and leaving the station, the adventurous journey begins. The composition is rocking back and forth on worn-out tracks, and I feel as if I were on a roller coaster, especially because I only parked my car a mere 20 cm behind the bumper of the Italian car in front of me. Dashing along at 70 km/h and practically without any safety distance is, after all, a funny, yet uncomfortable feeling. When going uphill, the railroad engineer is pushing the vintage 664-115 locomotive to its limits: smoke is pouring out of its exhaust pipes, with the noise of the locomotive and its cars accompanying the whole shebang. It's not very environmentally friendly, but having all these cars drive through the Sorica Valley would hardly be any better... If the noise of the locomotive bothers you, it might be better to take the motorail train in the opposite direction (from Bohinjska Bistrica to Most na Soči).

The real adventure, however, is driving through tunnels and over bridges. The track called the “Bohinj Track” was built at the turn of the 20th century. Some 28 tunnels, 5 galleries and 65 bridges extend over 144 km. The most impressive accomplishment was probably building the tunnel between Bohinjska Bistrica and Podbrdo. With a length of 6,327 m, it represents the longest Slovenian tunnel. At first, they began building it manually, by nailing rods into rocks, filling up the holes with dynamite, and blowing them up. The last couple of years, however, they used a drilling machine. The first locomotive drove through the tunnel 5 years after the beginning of the construction.

Driving through the Bača Valley, we’re observing the villages built in these godforsaken places. We see more grannies at their windows, curiously watching the cars that the train brings by this time around. Now and then, we also spot a grey-haired grandpa, leaning on his cane while sitting on a bench in front of his house with a pitcher of wine on the table. And then it struck me... the Bača Valley. This is where the phrase “zabačeni kraj” (a place in the middle of nowhere) comes from. We're checking out the hills surrounding us, making plans about where to climb next. It is especially interesting to see Mount Sorica where one can still admire the remnants of defensive strong points built during the Treaty of Rapallo. But it would be equally interesting to get to know the people who live in the valley. What are their lives like? What wisdom could they impart to me? What makes them stay here? 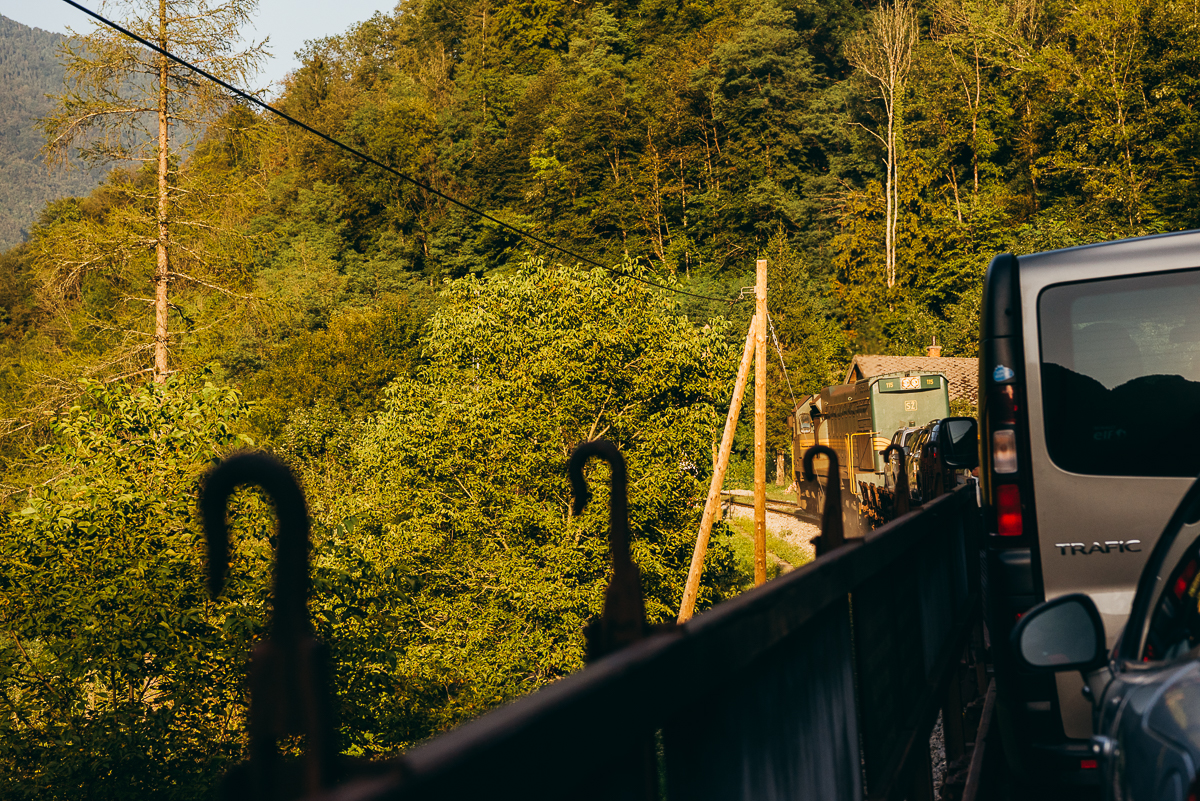 I guess their reasons are related to humility, and to the fact that they’re used to living in small villages where people greet each other loudly and all know each other. They don't need more: they don’t need to travel around the world or move to a larger town where their lives could be easier, where they could have more income, and where a Hofer would greet them at every corner. Here’s a thought: sometimes, we don’t need to go to the end of the world to experience and realise something new. By simply changing our usual ways, an interesting adventure might be just around the corner.

If you're staying in Posočje, I would warmly recommend you take the motorail train. In addition to natural beauty offered by the Soča Valley, you’ll also be able to see a part of our technical heritage. Vintage locomotives and the track built at the time of Franz Joseph I of Austria make it all even more special. I have yet to meet someone who wouldn’t be impressed by the track. Maybe I've given you an idea for a field trip in autumn: the Bovec Valley and its surroundings shine the most in the off-season, when the hordes of tourists leave.